The Maya civilisation is famous for its calendar, mathematical and astronomical systems, as well as intricate architectural buildings and unique written language. The Mayans inhabited a large area of northern Central America, and many of the ruins can seen to this day.

Visiting any one of the Mayan temples and archaeological sites gives you an amazing insight into ancient civilisations, and adds a whole new dimension on to your bulk standard travel experience.

If you’re interested in the ancient history and legends of Central and South America then check out the article below which is all about where to explore and learn about the most magnificent examples of Mayan architecture.

Sitting under the sunshine of the Yucatan Peninsula, the architectural style of Chichen Itza is different to the other ruins, partly because of the heavy influence of the Toltecs, who invaded around 1000. The Kukulcán Pyramid is one of the most beautifully preserved of the Mayan temples and has become an icon for the Mayan Civilisation. Over 1.2 million visitors come to visit the site each year, many of who take on the 91 steps to the top. There are 365 steps if you factor in the four sides and top level – one for each day of the year. You need strong legs to cover them all!

Tikal is one of the largest sites, leading many people to believe it was a capital city for the Mayans. It has been designated a UNESCO World Heritage Site, ensuring the preservation of the limestone temples, some of which tower 200 feet high. Much of the site is covered in forest and historians believe they have only uncovered a fraction of the Mayan site. What has been found is a wide selection of temples, palaces and squares, with evidence of dwellings in the countryside all around. It is best experienced at sunrise, where the light and shadows add a sense of mystery and magic to the view. 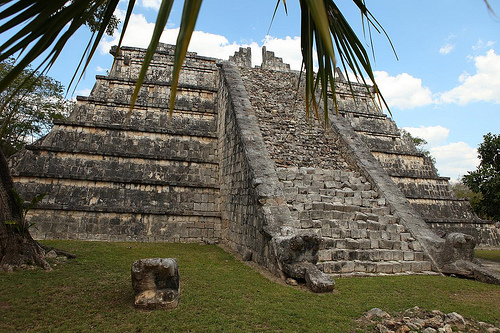 This site is very close to the border with Guatemala, so it is easy to visit from both countries. Historians believe Copán was inhabited by Mayan people for 2000 years and there are some fantastic examples of temples, palaces and stone sculptures. The main complex contains the Acropolis, what would have been a magnificent architectural complex judging by the size of the levelled ground, and several important plazas. There are many important sculptures and glyphs to be seen – many of which are still being deciphered. Maybe your Latin America tours could expose you as a natural code breaker!

This site covers roughly one square mile and is set up high on a ridge looking over the Mopan River. The most famous building in the complex is ‘the Castle’; a huge stone temple that has a grand staircase. Xunantunich translates as ‘Stone Woman’ and there is said to be a ghost that inhabits the site. It is most frequently seen in the Castle, so watch out! If you would rather not risk a run-in with a Mayan ancestor, there are 25 other temples and palaces to explore.

Less popular than Chichen Itza, but no less impressive, Palenque is one of the most studied sites of the Mayans; UNESCO believes it to be ‘one of the most significant achievements of mankind in the American Continent’. It offers a prime example of a Mayan sanctuary during the classical period and has some spectacular architecture and sculpted reliefs. What the historians find really fascinating is that only 10% of the site has been uncovered. The rest lies in thick forest. Apparently the Mayan Civilisation in Palenque used cocoa as currency – hopefully it was in its bean form and not as we like it today. Chocolate coins do not last long in anyone’s pockets!

Getting The Most From Your Singles Holiday