Love rally? Then you’ll love this!

Land Rover is going to sponsor the 2014 Defender Challenge by Bowler, an event which is operated by Bowler Motorsport as a kind of rally feeder ahead of the Dakar Rally and other global competitions. The Defender Challenge, which features seven rounds, is open to professionals and non-professionals, to give everybody valuable experience in world-class rallying.

The Defender Challenge takes place in several locations across the UK and it attracts thousands of fans every single year. This year, the Defender Challenge car will a standard Defender 2.2-litre diesel that has been remapped to produce 170 bhp and in excess of 330 lb/ft of torque by Bowler – the standard six-speed manual gearbox will feed power to all four wheels. The only other modifications to the car are four off road Kumho tyres and an MSA-approved full roll cage for safety reasons. 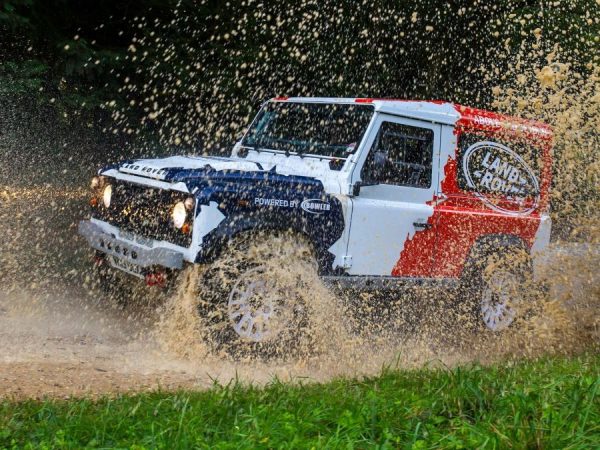 The Defender Challenge car will be road legal, meaning, it’ll be able to be driven back to base after the rally event is over.

Inside, the car will feature racing seats, six-point harnesses, and an intercom system for team communication. Everything will be fitted to the highest standard, and buyers of the car can also choose to option their car with upgraded brakes and purchase storage during the event.

Drew Bowler, the managing director of Bowler Motorsport, said (Telegraph): “Rally customers coming to Bowler have changed. They’re not all experienced racers, but people looking for excitement and adventure, and an achievable path towards world-class events.

“We’re delighted to be offering this path in partnership with Land Rover and the MSA, and believe the format offers a new way to experience different rally disciplines in the UK and overseas, and prepare entrants for the rigours and realities of Rally Raid. We’ve really enjoyed developing the Defender Challenge car – it’ll be a really fun championship.”

The 2014 Defender Challenge will kick off on March 2nd in mid-Wales. April stages in Somerset, June stages in Nottinghamshire, July stages in Swansea, August stages in Shropshire, October stages in Dorset and November stages at Scottish Hill Rally. In addition to this, the Defender Challenge will also have a training and test day in February, to whet the whistle of non-professionals and get everybody in the mood. Dealerships such as Farnell Land Rover Leeds are looking forward to the challenge.

Entrants will also have the option to travel the world and compete in events in North Africa and the Middle East.

Overall, the 2014 Defender Challenge looks as though it’s going to be the best yet.

How To Choose Truck Insurance For Your New Truck?

Most Common Mistakes That People Do While Driving Cars

Safety Concerns When Hiring A Car