It is fairly common for people working in the haulage industry to be inflected with certain types of injuries. Some have to endure pain after spending the nights in particularly cramped trucks. Others injure themselves during the delivery of exceptionally heavy loads. The police sometimes receive calls from distressed delivery drivers who’ve been involved in road accidents. It is absolutely essential to consider these types of risks if your thinking of acquiring a job in the transportation industry. You might even be worried about the injuries and medical conditions listed below. 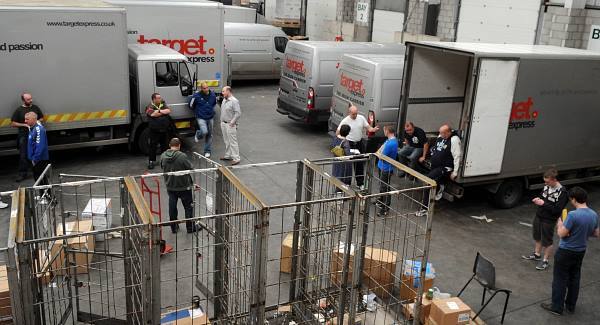 A fair number of transportation workers have injured their necks, backs and upper extremities while carrying out their everyday duties. They have experienced significant amounts of pain when attempting to lift weighty loads and perform tough vehicle maintenenace jobs. Some have even required extensive hospital treatment. Thankfully it is possible to reduce the likelihood of major injuries by refusing to carry out jobs which are beyond your physical capabilities. Your co-workers may even be prepared to help out with really demanding jobs.

This medical condition is commonly experienced by people who’ve been involved in road accidents. It happens when the head is suddenly projected forwards or backwards. Delivery drivers who fail to properly secure their loads are at a real risk of being struck and developing whiplash during vehicle pile ups. They may feel subsequent pain and have trouble moving their necks. Drugs such as Ibuprofen may well be recommended in such circumstances. Of course drivers will stand the best chance of avoiding whiplash if they act sensibly and concentrate fully when navigating the busy roads.

There is a common misconception that people who feel the effects of ageing are at the greatest risk of hip injuries. In reality this injury is likely to occur as a direct result of trips and falls in the workplace. Delivery drivers might suffer such misfortune when attempting to step out of their vehicles or deliver important loads. However, such injuries may be prevented by individuals who are able to remain conscientious and alert in the workplace.

Should Your Company Use Virtual Classroom Training?

Individuals working for delivery companies must expect to endure long periods of inactivity. They may be out on the open road for hours and sometimes days on end. They might also indulge in high fat foods in the roadside cafeterias. Unfortunately there is a chance that these workers will become obese. If this happens then there will be an increased likelihood of heart attacks and other health problems. This doesn’t mean that haulage workers should give up their jobs. However, they would be well advised to adopt strict exercise regimes.

It is hoped that you don’t suffer any misfortune during your career in the transport industry. However, there are a number of actions which may be taken if you are inflicted with an injury and require medical attention. It might be worth seeking compensation from your employers. Alternatively you might feel it necessary to file a personal injury claim. There are a variety of legal specialists who’d be very happy to help you.

Continental and BMW, Venturing Together To Make Automated System

Vital Venture with Droplet – Entering Into the Bright Future

Education funds under pressure in the EU Member States

What Should You Know About The Rising Popularity Of Medicaid?

Why Using An ERP Solution For Shipping Industry?

7 Most Popular Cosmetic Skin Treatments In The United States

Pros and Cons Of Car Insurance

Can Craftwork Help You Relax?

COLD EMAILS IN THE LEAD GENERATION

Why and How Should You Choose to Use Rigid Signage

Feeling Stress in Your Body? How Your Hips Prevent You from Letting Go of Unnecessary Tension

8 Workplace Mishaps You Can’t Help But Laugh At

The Emergency Service For The Haulage Industry