Shabby chic is often associated with France, and is an interior design style that attempts to look aged, whether by the use of vintage furniture which shows its age, or new furniture which, by distressing has been made to look like it has been passed down from generation to generation.

The history of Shabby Chic

When Shabby Chic was first innovated, oddly, it had rather grand pretensions. Inspiration was initially taken from the 18th century, using the style motifs found in Swedish decoration, the chateaus of the French and the Shaker style from America. One design element was foremost; there was an emphasis of quality over newness. 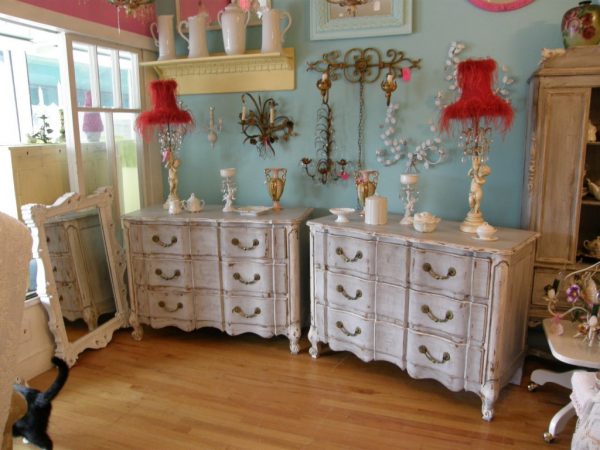 White is the overriding color in any French shabby chic design. White is generally the color of all the big pieces of furniture in the room, especially if the room in question is a bedroom. However, white painted furniture should not look pristine; it should be distressed to show flecks of the woodwork beneath.

Other colors for the French Shabby Chic palette include those of the countryside. Think lavender fields with their soft greens and purples, wild flowers of pink, soft blue and grey skies, and yellow plants and brown woods.

Linen and cottons are the best choice for a shabby chic look. They have a clean, pure look, and feel soft to the touch. Ideal colors for these are the ubiquitous white, but also cream, oatmeal and beige.

Patterns are also good in shabby chic. Florals work particularly well, and could be used on the upholstery of chairs, and perhaps also on drapes and blinds. Subtle candy stripes are also good and would add interest when used on bed linen, for example. Re-upholstering furniture is a great way to recycle, or upcycle, existing items.

The easiest way to achieve a shabby chic look is to add layers of texture to a room. This could be done by simply laying a throw over the back of a sofa or the end of a bed, but it could also involve something a little more intricate, such as displaying embroidered fabrics.

For a bedroom, wooden furniture works best. This means a wooden bedstead, wardrobe and chest of drawers, and preferably, a dressing table, all distressed to appear aged. In the kitchen, there is a little more scope. Wood again prevails here, but black metal also works well. This could be in the form of a simple cast iron chandelier, or an elaborately structured wall rack. The main furniture should include a good-sized table, both for working at and dining, and a dresser, where crockery, jugs and jars can be displayed in a haphazard fashion.

To really get that authentic French Shabby Chic look, install plantation shutters at the windows. As shabby chic is anything but unfussy, team them with patterned drapes, tied at the sides. Not only does this add interest by ‘framing’ the windows, but it also adds layers of texture.

Insert a nail with extra force

How to Make The Most Out Of A Small Flat

Tips For Waterproofing Your Basement