Computers are taking over aspects of our lives in multiple ways: we now have access to an entire history of recorded knowledge at our fingertips, we can communicate one-on-one with voice-recognition software, and predictive search knows the answers to our questions before we even have to ask. Google’s just launched a series of road-legal driverless cars that are “safer than human drivers;” computers are now better than humans at playing games and solving problems.

And now, computers are entering the medical field. 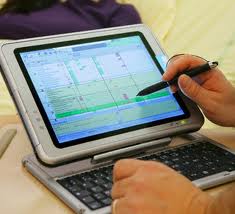 However, EMR systems are different. Designed to keep accurate records while aiding a doctor in making valuable diagnostic and treatment decisions, sophisticated EMR systems have patient records, suggested questions, and instant charting to help doctors move smoothly and efficiently through their daily practice.

Think of it like having your own personal Dr. House — or, perhaps, Dr. Computer — with a good administrative assistant thrown in. “Did you ask the patient about smoking habits?” the EMR system might suggest. In addition to providing checklists and suggestions, the EMR system is a one-stop shop for patient interaction: it has its own private messaging system, and doctors can even use smartphones or tablets to snap quick pictures of a patient, annotate them via the EMR system (e.g. “the white spots on your tongue are unlikely to be cancerous”) and record them instantly as part of the patient’s chart while simultaneously sending them to the patient via the secure messaging system.

With symptoms like these, it’s easy to see how physician interactions might change in the future; instead of having to crawl out of bed and visit a doctor’s office, a sick patient could simply snap a picture of a sore throat or swollen ankle and send it to the doctor via an EMR system. The doctor could make a few notes, like “this ankle appears less swollen than yesterday, continue the RICE method” or “your throat is clearly irritated but it doesn’t look like strep; have you been exposed to any environmental pollutants recently?” Then the notes go back to the patient, allowing an easy correspondence without the expense and time associated with a hospital visit.

Of course, no computer is yet ready to take the place of a face-to-face interaction, nor does it take the place of more sophisticated diagnostic machines such as the MRI or CAT scan. However, it does put us a bit closer to what is likely to become the virtual checkup, which Slate author Joel Garreau describes in imaginative language as follows:

“John and Ann have in their 2030 bathroom an appliance called Google Medicine. It’s the size of a toaster. Every morning, before brushing their teeth, they introduce into it a small sample of their bodily fluids. Spit usually does the job. The box analyzes it and sends the information up to the cloud, where today’s sample is compared to all of Ann’s and John’s previous reports, as well as all those of everybody else using the network. It is now routine for Ann and John to detect health changes weeks, months, and even years before symptoms might appear, allowing unprecedentedly early—and thus relatively minor and cheap—personalized interventions.”

We’re not there yet — nowhere near it — but we’re on the way. And the development of “Dr. Computer” programs like the EMR system are the first step.

Learn Poker On Your Mobile!