For anyone who has encountered the occasional rustle of undergrowth or witnessed a white bob-tail disappearing behind a bush then the joy associated with seeing wildlife in its natural habitat is definitely a moment to cherish.

Nowhere on earth is this experience more pertinent than in North America as from large mammals such as bear and bison, to rarely seen creatures such as lynx and Arctic foxes, if you’re hoping to discover some of the most endearing animals on the planet then you will not be disappointed.

Below are just a few of the wildlife species that you can expect to see whilst visiting North America’s national parks and if you want to learn more about their natural habitats and where you’re most likely to find them then read on and get your backpack ready to go. 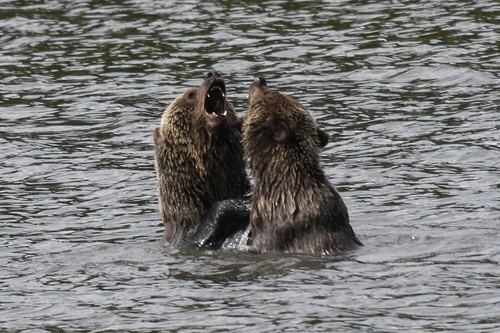 If you’re thinking about undertaking wildlife holidays in America then the chances are that you’re going to be hoping to spot a bear or two albeit from a safe distance. Black bears and brown bears (grizzlies) can be found throughout Canada and the north of America especially around dense forest and some grassland areas. Well known for occupying territories around 750sq miles in size, it’s quite hard to pin a bear down to a particular ground however, come the autumn and there’s only one place to look and that’s down by the teeming river side or even along the coast.

These black and white striped critters with bandit masks can be found within many of North America’s national parks and love nothing better than ransacking a dustbin if they stray close to urban areas or camp grounds so, you’ve been warned. Usual ‘coon habitat is usually within a forest setting however, they have been known to turn up by the coast and higher up mountain slopes so keep your eyes peeled no matter where you are on the trail.

These cute little fellas look similar to their tree dwelling cousins although a speckled white back and brownish pelt is an easy give-away. It’s quite common to spot an Arctic ground squirrel if you’re exploring in Alaska and most parts of Canada and if you’re undertaking a walk higher up a mountain slope then keep an eye out for burrows which are usually alive and kicking around the springtime.

As the biggest member of the wolf family, the grey wolf has taken on an almost mythological status with many Native American beliefs and stories entwined within the history of this canny alpha predator. With their numbers in decline you’ll be hard pushed to spot a Grey on your travels however, the further north you go and the denser the forest, make sure you keep your ears open for that world-famous howl.

Although there are various examples of red foxes inhabiting urban areas of North America there’s nothing that beats seeing this nubile predator in the wild. As foxes are generally nocturnal creatures, you probably won’t spot one during the darker months of the year however, in the longer days of the summer it’s quite possible to see a family, especially around the edges of woodlands, forests and within close proximity to farmsteads and tempting livestock.

As the name indicates, these rugged species of sheep have huge, heavy horns and can be found all over America and Canada with various sub-species commonly found within their own specific habitat i.e. Mexican and Californian bighorns. The Rocky Mountains have long supported this quite impressive creature and if you’re heading into anything resembling rugged mountain foothills and grassy alpine pastures then you’re sure to find some without too much bother.

These cute looking rodents are a sub-species of the ground squirrel and can be found occupying grassy areas of North America particularly at higher altitudes. Providing the prey for a great number of larger predators means that keeping populations of prairie dogs at full capacity is essential for maintaining the food chain and as such the fight between conservationists and farmers (who consider them pests) continues to rage on.

10 Don’ts To Consider While Renting A Car

4 Ways To Stay Healthy On The Road

Traffics, Fuel And Roads In Nepal