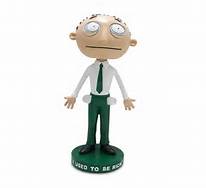 Sports are as ingrained in the American culture as any other event or outing. In fact, the notion of an America without professional team sports is about as unbelievable as an America without a central government. Be it Basketball, football, baseball or hockey, everyone has their favorite. And the only thing better than spending a relaxing day watching a game on TV is heading off to the park or arena to watch it live.

Then there’s the merchandise. From T-shirts to foam No. 1 fingers, sports merch is a big part of the engine that drives the athletic community. And there are few more iconic and profitable items than bobblehead dolls. These 3-D caricatures, with their oversized heads formed to look like sports legends of past and present, can be found on the mantles or desks of fans both young and old.

But not all bobbleheads are created equal. Whether it has to do with craftsmanship or the skill of the artist, some of these items hit the mark while others come up short. With that in mind, here are some of the best and worst sports bobbleheads ever created.

Keeping with the football theme, this statue version of the older half of the Manning brothers is a job well done. Like the Favre doll, the head is sleek and lifelike (enough), while the body is frozen in a pose that evokes classic sports glory. The head is also gigantic enough to get good bobble for the buck.

May not be the most realistic face of a major sports star, but that’s a minor criticism when taking historical context into account. No baseball fan or memorabilia hound can be content without this little Brooklyn Dodger legend in his or her collection.

This gross misrepresentation of the famed Giants slugger is almost as egregious as the performance-enhancing drugs charges he was convicted of. What stands out most is that the face looks nothing like the real guy, having likely come from the mold of another player. And unlike the real Bonds, this bobblehead is unusual in that the head is pretty much in proportion to the body. What a bizarre twist of fate.

No offense to the artist, as this bobblehead is a fairly decent rendering of the famous Heat player. Where one takes umbrage is in the decision to position the figure in such a way that he looks like he’s auditioning for a featured role in “Flashdance.” If this doll is any indication, Wade has mastered the art of the “ball change” as he has the art of the “ball hog.”

This bobblehead looks more like Bill Nye the Science Guy rather than the talented Suns player. Not only that, but there is a sister “lollipop” Steve Nash bobble that is edible. It comes complete with lipstick and the wide-eyed, piercing stare of a sociopath.

In the end, the good thing about bobblehead dolls is that they aren’t designed to be realistic. So while one person may walk right by that Barry Bonds with someone else’s face, another may find it is perfect sitting on the dash of his or her car.

Custom Bobbleheads offers one-of-a-kind bobbleheads that can be fully customized from head to toe on their website, CustomBobbleheads.com. Meredith Hunter writes independently on creative decor and gift ideas.