The quality and the variety of cannabis-based products has improved immeasurably in recent years, and this is helping to increase the therapeutic value of cannabis and its popularity among consumers. Much of the new interest is thanks to the hubbub around cannabidiol (CBD), a non-psychotropic component of the herb that boasts a myriad of health benefits. CBD is not about to get recreational users jumping for joy, but many with hard-to-treat illnesses are curious about whether CBD products could help them, as are those who simply want to boost their wellbeing. 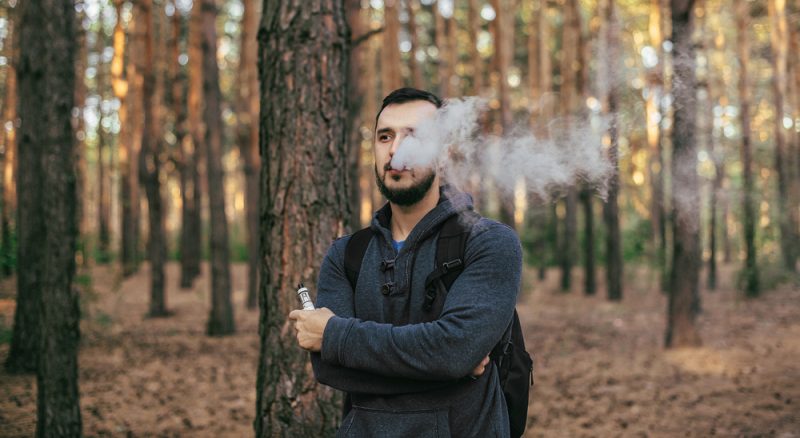 As with tobacco cigarettes, smoking is losing its dominance as the most popular way of taking cannabis and its cannabinoids, with vaping emerging as a popular and healthier alternative. Flavored and unflavored e-liquids infused with CBD do not create the carcinogens and toxins when heated that plant matter does when it is burned, and therefore the health risks are far fewer.

In this post, we’ll give a primer as to what CBD is, and how vaping this non-intoxicating cannabinoid that doesn’t cause a high could be beneficial for you.

Cannabis is made up of hundreds of compounds, the most notable of which are cannabinoids – these chemicals are found in abundance in cannabis, but in few other plants and affect the body’s endocannabinoid system (ECS). CBD’s influence on the system’s cannabinoid receptors are indirect, but its overall impact on the ECS helps to promote regulation and bvalance in the body. This is the exact opposite to THC, which is a partial agonist of cannabinoid receptor 1 (CB1) and 2 (CB2).

The full role of the ECS and the effects of the 100-plus cannabinoids in cannabis, and indeed the few cannabinoids found elsewhere, are far from understood. ECS research is cutting-edge science that is still in its infancy, having only begun with the system’s discovery in the 1990s. However, we do have a base understanding of the areas of health regulated by the ECS – these include immune system response, how the body perceives pain, appetite, the reproductive cycle, mood, appetite, cognitive function and memory and bone formation.

CBD can influence the binding affinity of receptors and the levels of endocannabinoids in the ECS, promoting the balance necessary to remedy inflammatory conditions, pain, mood disorders and so on. CBD has antipsychotic properties courtesy of its antagonising effects on the CB1 receptor, and also boasts neuroprotective and neurogenesis effects which may hold the key to treating Alzheimer’s disease and other neurodegenerative illnesses. However, research in many of these fields is still on its infancy, and it is uncertain whether positive results in animal testing will be replicated in humans.

Furthermore, CBD has an important role in whole-plant cannabis products, working to moderate the psychoactive properties of THC. This ensures that cannabis is tolerated better by the body.

Good news: you don’t have to worry about failing a drugs test because you’ve taken CBD. Drugs tests that detect cannabis use are only looking for THC, since this is the chemical which causes the disorienting psychoactive effects. As CBD is non-intoxicating, there’s no need for tests to search for it – it’s as simple as that.

That said, as full or broad-spectrum CBD e-liquids do contain very low quantities of THC, you may need to be careful if consuming large quantities of these. THC can take several weeks to fully leave the body, so concentrations can build up with heavy and sustained CBD e-juice use, even if it still won’t get you high. To avoid the very slim possibility of failing a test, choose CBD-isolate e-liquids, as these are made with just CBD, and no THC – although they won’t contain other non-psychoactive cannabinoids or terpenes.

Why vaping CBD is preferable to smoking hemp

CBD is found in high concentration in hemp plants (a low-THC form of cannabis sativa), and hemp flower can be legally purchased for smoking. However, there are health risks with smoking cannabis and hemp, just as there are with smoking tobacco. While some enjoy the experience of smoking a joint or a bowl from a bong, it’s not a necessity, and the same quick effects can be obtained in much healthier fashion by vaping CBD e-liquid. Moreover, smoking is an inefficient way to get the therapeutic benefits of cannabinoids, as a percentage is always lost as the plant matter burns away.

The market for CBD e-juice has grown, and consumers have a choice of flavored and unflavored products, and e-liquids with potencies to suit first-time users and experienced vapers. But why even vape at all, when CBD can be taken in various other ways, such as in edibles and capsules?

The advantages of vaping

Those consumption methods are perfect for when you don’t need the CBD to kick in immediately, but the delayed response time is not so good for when dealing with acute conditions, like neuropathic pain. In these cases, fast relief is paramount, and there’s no quicker way to medicate than when inhaling the vapor of a substance. The CBD begins to penetrate the tissues of the lungs just seconds after inhalation, and the relief is noticeable after just two or three minutes.

CBD e-juices, such as those from Veedverks, can also be used for relaxation purposes, in the same way one might chill out with a beer or glass of wine. CBD boosts mood and relieves anxiety, but it doesn’t impair short-term memory or cognition, so could also be used like a nootropic to enhance concentration.

Here are a few conditions that people are managing by vaporizing CBD.

The value of cannabis, or at least part of it, for anxiety, has become more apparent now that the cannabinoids can be studied individually. Research into THC and CBD has revealed that while the former can increase the likelihood of anxiety because of the mind-altering and mood-changing effects, the latter actually has potent anxiolytic properties. CBD is also potentially for anxiety than existing selective serotonin reuptake inhibitor (SSRI) drugs as it starts to work from the first dose, and not after two weeks – or more – of treatment.

Some people suffer from chronic anxiety, but the condition tends to be most problematic when it hits suddenly, like with panic attacks. Anxious people usually have certain triggers which sets off symptoms – for example, those with social anxiety can struggle with public speaking and social gatherings. Studies have looked at the mechanisms in which CBD alleviates anxiety and also practical uses for the cannabinoid, and the findings have been overwhelmingly positive.

There is one upside of having a condition with triggers – having that foresight allows you to medicate beforehand, stopping anxiety from getting out of control. If you have social anxiety, the next time you’re meeting new people or have a job interview or are faced with any situation that may induce a panic attack, try taking some CBD vape juice a few minutes prior to the engagement.

This offers fresh hope to patients with notorious inflammatory conditions, such as Crohn’s. Dose up with a vape juice from CBD Drip, and feel the pain subside.

The jury is still out on whether CBD is an effective long-term treatment for depression, but the cannabinoid can certainly be used to improve mood in the short run. CBD does this in the same way that exercising improves mood via the “runner’s high,” by increasing levels of anandamide, which has antidepressant qualities.

How to Choose Supplements with Antifungal Properties

7 Tips To Develop A Clinical Practice