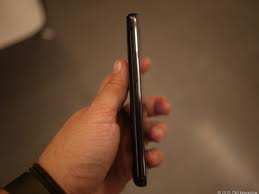 Smartphone’s are a technological marvel. They contain so many features while looking stylish and compact. For some, the compactness of a smartphone is an important factor that determines its usability. One thing that makes a Smartphone what it is the fact that it’s portable; you will want a phone that you can not only bring around, but also easy to store and pull out anytime you want. Because of this, people would make a big deal over how thin a smartphone can be. Which brings us to the question: which smartphone is the thinnest in the world?

The answer to this question would have been Apple’s newest smartphone, the iPhone 5. Phil Schiller, Apple’s Senior VP of worldwide marketing, called the iPhone 5 the thinnest and lightest iPhone ever made, clocking in with a slender body of 7.6mm. It would have easily been the thinnest and lightest smartphone available, that is, until the Chinese-based smartphone developers Huawei and Oppo came into the picture. Huawei announced the Ascend P1 S back in January at the International CES 2012. Coming in with the thinnest point at 6.68mm, it looks as if Huawei has Apple beat in that department, up until you notice a very noticeable bulge at the back of the phone, making the whole phone thicker than the iPhone 5. That’s not all, another Chinese smartphone firm, Oppo, joins the fray for the title with their own phone: the Oppo Finder, with 6.65mm at its thinnest point and 7.1mm at its thickest point. This would give Oppo a legitimate claim for the title, but there are a few things that would question the claim, namely the fact that it’s not 4G enabled and the fact that it is not available outside of China. Still, the Oppo would count itself as a contender since the title is “Thinnest Smartphone in the World.”

Liza John is an IT professional from Selftesttraining .Have you really looked for this selftesttraining.com Assistance? Move ahead to take the benefit of Cisco Certifications and pass your exam easily.