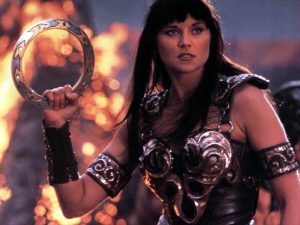 Television Series have become very popular in the last few years. For some they are just a way to pass the time on a rainy weekend, but for most, they are an important part of everyday life. There are literally hundreds of good TV series at the moment. Whether they are about romance, history, science fiction or fantasy, they all have one thing in common: they keep fans at the edge of their seats. Today we will be talking about fantasy series because it seems that they have become the next big thing on the big screen. Sure, there are some memorable names when it comes to these types of shows like Addams Family and Bewitched, but it was only after the great success of Buffy the Vampire Slayer and Game of Thrones that the audience became more interested with this genre. Without further ado here is our top two best fantasy series of all time.

We don’t know about you, but we could never pass the chance of watching two extremely beautiful women dressed in leather armors battle monsters in order to save the Ancient World from the Wrath of the Gods. And as if they weren’t enough, a bikini-clad Aphrodite appears from time to time to steal your hearts forever. But it is not only the undeniably attractive women that make the series amazing. The producer has managed to put together awesome scenes which oscillate from dark violence to scenes of intense drama and comedy. Moreover, the leading characters are full of virtues and personality, and, well, there’s also Hercules, Ares, chariots of fire, supernatural creatures and blood. All in all this is one of the best TV shows of all time, which will have you hooked from the first episode. If we’ve convinced you to watch it, you should definitely see it in HD quality, which just got more affordable thanks to Time Warner Cable Offers.

Lord of the Rings and Harry Potter almost had us convinced that when it comes to fantasy, nothing will ever surprise us anymore. We were wrong. Game of Thrones has given a whole new meaning to the word fantasy. Basically the story is about seven noble families who fight over the control of a mythical land called Westeros. But there is more to it than just nobles fighting for power. With fine strokes on the imaginary canvas of fantasy, the producer creates a true culture of prostitution, mythical creatures, struggle to survive, principles, and the North. Although we don’t know what exactly lies behind the wall, and what Winter will bring, we are scared to our very core. Game of Thrones imagines a world withing a world, and fans all over the world were left wanting for more in last season ender.

There you have it, two awesome fantasy series you should definitely see before you die and which will undoubtedly become legends. So make yourself comfortable, get your chips and prepare to immerse yourself in a world of fantasy.