July 2014 will mark the 200th birthday of Samuel Colt, the firearm legend who was at the forefront of developing the first practical revolving percussion cap firearm. These original blackpowder revolvers were the forerunners of the legendary Colt Single Action Army Revolver which became an American firearm legend.

Production techniques developed by Samuel Colt, including interchangeable parts produced by machine, and a successful assembly line, helped to revolutionize manufacturing during the Industrial Revolution. Samuel Colt reportedly said, “there is nothing that can’t be produced by machine,” and this helped his company achieve remarkable success.

During his company’s first year of operation, his machinery’s production capacity was around 5,000 finished handguns. In 1856, Colt’s company had 150 weapons in production per day. He was also a genius at marketing his firearms, and often presented firearms to influential people around the world. As a result, Colt’s firearms were successful internationally and in the late 1800’s Colt revolvers were among the most recognized firearms in the world.  In 1851, Samuel Colt even set up a plant in England to produce some of his revolvers.

People around the world were impressed with his presentation show pieces which were engraved and decorated in gold and which regularly won prizes at world trade fairs. He was given the title Colonel Colt by the Governor of Connecticut to help him become a successful businessman overseas and for political support at home. When Samuel Colt died in 1862, because of his creativity and his knack for business, he was a wealthy man. 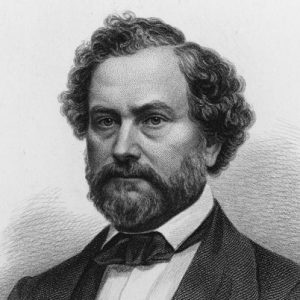 Samuel Colt was born on July 19th 1814. As a young man, he had a great talent and interest in the ways that things worked. He would disassemble various mechanical devices to learn how they operated. When he was sixteen years old, he went to Amherst Academy in Massachusetts, where he studied navigation. In 1830, Colt sailed on the Corvo as a seaman. He became fascinated with the way that the ship’s capstan operated. It was from observing the capstan that he was able to create and carve a wooden prototype of what would eventually become his famous invention—a firearm with a revolving six-shot cylinder.

With the introduction of the Colt .45 Single Action Army Revolver in 1873, history would be made and legends would be created. The Colt Single Action Army .45 was there as explorers and settlers moved West in the 1870’s, not long after the Civil War ended. The Colt .45 became a favorite for lawmen of the Old West and as well as for outlaws. Cowboys herding cattle on the vast plans and prairies of the western frontier relied on their Colt revolver. The Colt “Peacemaker” Single Action Revolver was also popular with Cavalry Troopers. The U.S. Cavalry used the 7 ½ inch barrel and the U.S. Army used the 5 ½ inch barrel as their standard military service revolvers. Those who carried the Colt .45 could find comfort in a simple-to-use firearm with the capability of firing six shots in a row without reloading.

The Colt SAA was known as the “Peacemaker” because of its unparalleled reputation and ability to maintain peace. The Colt “Peacemaker” Single Action Revolver created a way for law-abiding settlers to protect themselves against the many dangers out West. After the Civil War, a slogan developed which stated, “Abe Lincoln may have freed all men, but Sam Colt made them equal.” It is also reported that Samuel Colt said, “The good people in this world are very far from being satisfied with each other and my arms are the best peacemaker.” The firearm was also known as “The Equalizer” and “The Gun that Won the West”.

The Colt .45 Single-Action Revolver has been popular in films since the beginning of the Western genre. Cowboys and Indians firing at one another with revolvers could shoot over their shoulders with perfect aim (only in Hollywood), and then cowboy movies quickly became irresistible. These movies were one of the reasons the Colt .45 revolver is one of the most well-known and recognizable guns in the world. Even starring as the lead in it’s own TV show, Colt .45, and its own film, Colt .45., the revolver was a staple in the depiction of the American West on the screen. Children idolized their cowboy movies, and it wasn’t long before youngsters were acting out what they saw on the screen and strapping on their trusty cap guns copied after the Colt .45 revolver. Western films remind us of the large role that the “Peacemaker” played in forming the West.

Because of its historic significance as the “first” revolver from a firearms legend, the Paterson revolver is one of the most valuable collector firearms, but it was only the beginning for Samuel Colt and his legacy. After developing the Paterson revolver, Samuel Colt would go on to introduce a number of other firearms, including the Walker, a number of dragoons, the 1851 Navy and then the more powerful 1860 Army. These models are all considered classic Colts and are highly desired by modern day collectors of firearms, Civil War enthusiasts and Old West aficionados. His innovations made his firearms the weapon of choice for the military, settlers, lawmen and outlaws. They were used in the Mexican-American War, and extensively in the Civil War. His company experienced phenomenal success and still remains a leader in the firearms industry, continuing the tradition of quality established by Samuel Colt.