The term “eating disorder” often brings to mind the image of a young, suffering woman. Eating disorders are a serious problem among women, but according to the National Eating Disorders Association, millions of men are also affected.

The causes of male eating disorders are varied – they include genetics, psychological and emotional problems, and societal pressure.

Men whose immediate family – siblings or parents – have eating disorders are likelier to develop them as well. From a psychological standpoint, eating disorders are more prevalent among men suffering from perfectionism, low self-esteem, unhappy relationships and poor impulse control.

Men with anorexia don’t just want to be lean – they have a distorted perception of their bodies and a life-threatening fear of gaining weight. Other characteristics of anorexia nervosa include: 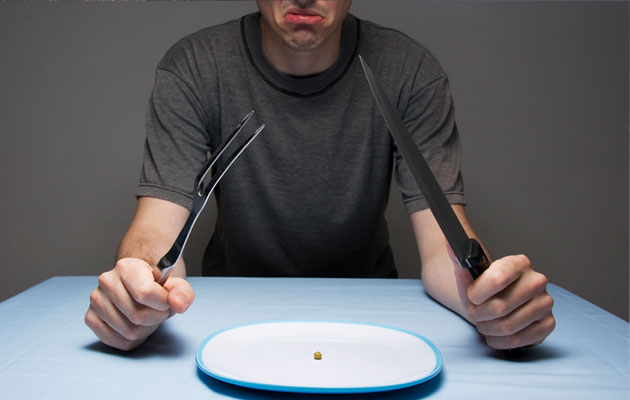 Bulimia nervosa is another potentially fatal eating disorder which can affect men. In fact, approximately 50% of people who have suffered from anorexia nervosa go on to become bulimic. Bulimia is characterized by episodes of binge-eating – the consumption of exceedingly large quantities of food in a short period of time – followed by self-induced purging (vomiting, or the use of diuretics, laxatives, food restriction or intense exercise).

Men with bulimia nervosa feel a loss of control when they binge-eat. A bulimic may hide food and eat it when no one is watching, feel disgusted about their body, check their weight frequently and, like in cases of anorexia nervosa, have a distorted perception of how their body looks.

Bulimics may be intensely afraid of gaining weight, suffer from depression and isolation, have gender-identity issues, feel worthless and exhibit a strong need for control – which is often met by purging.

Bulimia can damage the body in a number of ways, including:

·        Damaged teeth (from the corrosive effects of vomit)

Binge eating – a severe eating disorder also known as BED – shares one similarity with bulimia nervosa: recurring episodes of compulsively overeating. Unlike in bulimia, binge eating does not involve purging as an attempt to prevent weight gain.

Male binge eaters eat large quantities of food, abnormally quickly, even without being hungry. They may feel a lack of control when binging. Like bulimics, they may hoard food and eat it when others are not around. They often eat throughout the day, without planning meals.

Men that binge eat are at risk for a number of physical issues, including cardiovascular problems, blood sugar fluctuations, fatigue and joint pain.

Unlike anorexia nervosa, bulimia nervosa and binge eating, muscle dysmorphia – also called “megarexia”, “reverse anorexic nervosa” or “bigorexia” – is an eating disorder which overwhelmingly affects males. It is characterized by the sufferer’s fear that they feel weak and undersized – even if the opposite is true.

A man suffering from muscle dysmorphia has a powerful preoccupation with the appearance of their body size and muscles. Even small changes from what a “bigorexic” considers their aesthetic ideal can cause significant emotional distress. Some scientists consider this eating disorder to be a form of obsessive-compulsive disorder, rooted in the media-driven standard of extremely muscular, hyper-masculine men.

Men with this eating disorder may suffer from:

·        Soft-tissue damage and joint pain (due to physical overexertion)

·        An increased risk of depression or suicide

Hope for Men with Eating Disorders

Mental and emotional disturbances are at the root of most eating disorders. As such, one of the best ways to treat sufferers is with the help of a qualified eating disorder therapist. Therapy can safely address many underlying issues, including low self-esteem, anxiety, depression, guilt and emotional trauma.

How Does The 24-day Advocare Challenge Work?

The Effects Of Smoking On Oral Health For Your Teen

The Most Effective Ways For Women To Increase Fertility