Many people like to think that they are a dab hand at the DIY and in many cases they are. But whether due to financial pressure, or DIY programmes on TV, or for whatever reason, many more people are attempting DIY projects without the skills or knowledge to either carry them out properly, or even complete them.

The rise and rise of the DIY disaster costs Brits in the region of £139 million per year to put things right according to a report on UK money website Moneywise.co.uk. So what is it that we are doing wrong and why are the people in the know still recommending that the best option to get things done is to find an expert? 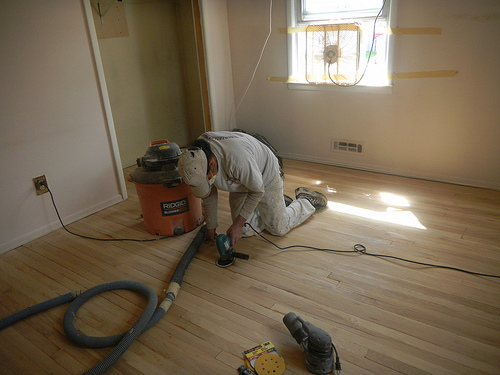 Moving or covering up furniture and equipment before you let loose with sandpaper, a paintbrush or a plastering trowel seems to be such an obvious thing to do. However not doing this and ruining electrical equipment with dust, and damaging carpets, furniture and other fixtures through dropping and spilling paint and chemicals is one of the most common and costly issues. Some DIY shirkers are even painting and carpeting around furniture and fixtures rather than moving them according to some reports; can you believe that!?

Good DIY decorators know that a big part of getting the job done right lies in the preparation. Rubbing down paintwork and walls prior to repainting is a prerequisite to a good job. Apparently there are many people out there who simply get the paintbrush out and splash paint liberally all over  wallpaper and unprepared walls and woodwork in the honest belief that it is actually going to look better afterwards. Nobody is more surprised than these people when they step back and realise that things look worse than when they started

Remodelling your home by turning it into an open plan minimalist mansion over a long bank holiday weekend on a budget of £150 is ambitious to say the least. Many people would describe it as foolhardy. Leaping into a project with no real idea of how much time or money is involved is the cause of many of the thousands of uncompleted projects lurking out there in middle Britain. According to the figures, 25% of those who start out on a DIY project are guilty of underestimating the time and costs.

Underestimating the Level of Skill Required

It is amazing how many people will go and buy themselves a plastering trowel or a plumbing spanner and launch themselves into a project that a skilled tradesman has taken a four year apprenticeship to learn. And once you have started to spread that plaster or dismantle that plumbing, there is no going back. An alarming 6% of all DIY projects result in a burst pipe and there is nothing like water damage to turn a small project into a much larger one.

So it is no wonder that while insurance companies express “admiration” for the growing number of people taking on projects themselves, they also advise that in many cases it is probably better and more cost-effective to go and find an expert to get the job done.

In this age of the internet, sites like WhyNotCompare have made the task extremely simple by providing a platform where people register and advertise their project for free, and then simply select from the pre-checked and approved tradespeople and companies who express an interest in taking on the job. Of course these people are competing for your business which means that the pricing is extremely competitive too. Probably the best and cheapest alternative to the DIY disaster.

How To Repair Hardwood Flooring?

Top 10 Tips to Design your Living Room with Sleeper Sofas

5 Tips For Your Small Greenhouse