Chronic obstructive pulmonary disease (COPD) refers to a recurring illness of the respiratory system that makes it difficult to breathe by restricting the flow of air in and out of the lungs.  COPD includes chronic bronchitis, emphysema, and other lung conditions. These illnesses are most often caused by smoking, but can also be brought on by other irritants such as heavy dust, air pollution, or chemical fumes. Symptoms are very painful, and can become increasingly debilitating over time. Treatments range from lifestyle changes and home self-care to surgery such as a lung transplant. 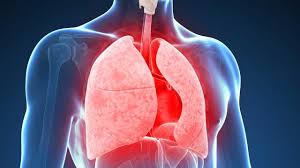 Recent studies have suggested that bioidentical hormone replacement therapy (BHRT) might prove to be an effective treatment for COPD. BHRT refers to lab-created female reproductive hormones that are molecularly and chemically the same as those that occur naturally in the body, but are made from plant chemicals. Conventionally, BHRT has been used to treat uncomfortable symptoms of PMS and menopause in women.

Female reproductive hormones such as estrogen and progesterone have been shown to help heal severely damaged lung tissue in lab animals. Other studies have demonstrated some improvement in asthma sufferers taking BHRT, and that some women who use bioidentical hormone replacement therapy have proved statistically less likely to develop symptoms of COPD.

In addition, women are generally known to be more “lung-healthy” than men overall, in that they are less likely to develop breathing related cardiopulmonary conditions. Many experts believe that is, in part, at least, because of the difference in estrogen levels and distribution, and the effect these have on lung growth and repair. The theory of using BHRT to treat COPD is that the doctor can take advantage of the demonstrated benefits of these hormones on patients.

There is no known cure for COPD, and unfortunately, until this point, treatments for COPD are inconvenient, unpleasant and mostly ineffective in the long run as the diseases progress. Bronchodilators, inhaled steroids, inhalers that combine the two, other forms of steroids, theophylline, oxygen, and in the most serious cases, surgery and even lung transplant, come with many side effects and health risks, forcing patients to choose between better lung health and feeling well in other areas.

It is imperative to consult with a cardiopulmonary medical professional to determine what level of COPD you might have, and the range of treatments available to you. Finding a doctor who is willing to entertain all of the most cutting edge treatments is always the best option. If you life in the Houston, TX area, contact a medical professional well-versed in BHRT treatments for COPD today.

What Are The Different Types Of Maxillary Sinus Augmentations

When To Seek Help: Signs For The Elderly