We all have that one particular food type that has our taste buds begging for more; whether that be sweet treats or something more savoury. Many of us have a thing for hot and spicy foods, which create a whole array of sensations on our tongue as we eat. If you’re bored of ordering a Vindaloo from your local takeaway, and want some truly mind-blowing spicy foods, then this is the definitive list just for you. 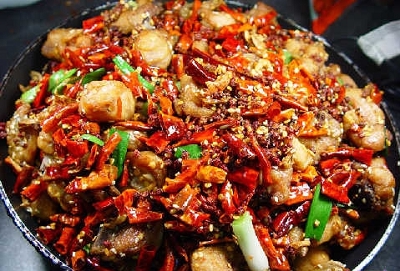 The World’s hottest pepper, as recognised by the Guinness Book of World Records. This hybrid plant was actually bred to create something that would do more than just tickle the tongue. On the Scoville Heat Unit (SHU) scale, which measures spiciness, the Carolina Reaper Pepper has recorded highs of 2,200,000 SHU. In comparison, the hottest Jalapeno pepper is rated at 8,000 SHU; that’s a big difference. There’s a lot of health warnings that come with eating this super spicy treat, so be careful not to swallow the lot in one.

Another hybrid, this time a chilli pepper that has been created by combining Naga Jolokia and Trinidad chillies. Considering the Naga Jolokia chillies have been researched to use as weapons by India’s ministry of defence, you can only imagine the damage a Naga Viper could do. On the SHU scale this tastebud tingler is 1,369,000, which is 10 times stronger than our next offering; the Bird’s Eye Chilli.

If you want a food you can actually taste without losing all sensation in your tongue, then perhaps the Bird’s Eye Chilli is for you. Often used in Indonesian cuisine, the 100,000 SHU is about as far as most people get without crying and throwing in the towel. Just a handful of these can be used to spicen up even the most boring of stews. Honestly though, just a handful will do.

This is probably one of the most famous spicy foods, due to it being named the World’s Hottest in the past. Although it has been taken over by the Carolina Reaper, this is one of the only non-hybrid peppers to make it to the top of the Scoville Heat Unit scale. Many people opt for a tiny amount of Ghost Pepper hot sauce instead of swallowing a whole one, although it depends how brave you are. Also known as Bhut Jolokia this spicy offering has hit 1,041,427 SHU in the past.

If you would rather a hot and spicy food that fills your belly as well as burns your tongue, then the phall curry is probably what you’re looking for. Many describe eating this Indian delicacy as “putting a spice grenade in your mouth” and we can see why. This harmless looking chicken curry contains the aforementioned ghost pepper, along with a whole host of other spices and chillies. This is not one for the faint hearted; we would dread to guess the SHU of an authentic Phall curry.

Which one are you going to try first? We’d recommend an ice cold drink on standby, whichever one you opt for!

The Most Popular BBQs For Backyard Grilling In The United States

Let’s Figure Out The Difference Between Khaman and Dhokla

Why Cow Milk Subscription is Beneficial For You?